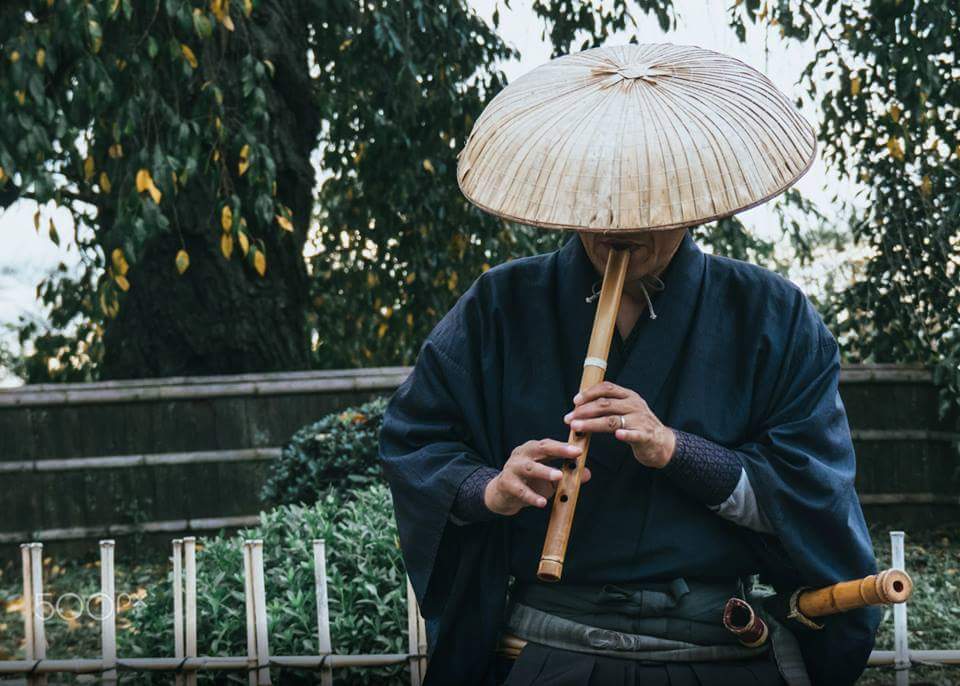 Miyagi trænede under Higaonna i 15 år 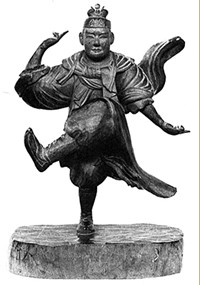 Here is a picture of the wooden statue  that is sometimes placed on a shelf in some of the Goju ryu dojo, particularly in Okinawa. This is Busanagashi. Then, what is it? The Goju ryu practitioners may know about this figure and of its legend. Most of the practitioners of the other styles most likely have never heard about this or let alone its origin and legend.

I think it is interesting to discover a page of karate history so I did some research to find its legend. Here is what I have found. In short, Busanagashi depicts the Bushin (武神), god of martial arts. Therefore, it is considered as a protective deity of the Goju ryu (剛柔流) karate, at least by some of the branches. It is similar to the idea of having a statue of Christ or Virgin Mary in a catholic church.

There are supposedly two legends surrounding the story of the Busaganashi, the Okinawa version and the Chinese version. Both are basically the same. The two versions, probably, became slightly different as the story was passed down from one generation to the next.

Legend has it that in ancient China, a young single woman gave birth to a baby boy. With no father to take care of the baby, the woman’s family decided to abandon the baby in a nearby bamboo forest. After a few days, the baby’s family began to have a change of heart. They returned to the bamboo forest to see whether or not the baby was still alive. To their amazement they found that the baby had been cared for by the trees themselves. The plants grew over the baby for shelter and animals of the forest provided food for the baby to survive. Seeing this as a sign they decided to take care of the child as well as they could. They named him Busaganashi.

China, at the time, had a strict caste system in which it was very rare for an individual to escalate to a higher social class. However, every year there was an aptitude test that gave individuals a chance for social mobility. As a teenager, he scored remarkably high on the test, which gave him an opportunity to join the military. While in the military, he perfected his martial arts skills.

One day, when he was about twenty years old, one of the large towers caught on fire. The fire was too big for the city to put out with their meager resources. Seeing this, Busaganashi, using his dynamic breathing, which he had perfected, was able to put out the fire with a powerful breath. By doing this he saved the city and was given his title as the “Marshall of Wind and Fire” and became the symbol of martial arts.

But what are the origins and legends surrounding this deity or god? The Busaganashi is found in the well-known and most influential martial art book, Bubishi. This historic book is a Ching dynasty (1644-1911) Kung-Fu manual. It is, in fact, the most comprehensive military book in the Chinese history. Busaganashi means “my dear respected kung-fu warrior” but the formal name of the martial art god is the: “Grand Marshall of Wind and Fire.”

The Busaganashi is the local Fujianese and Taiwanese god of business, art, music and wealth. He is worshipped in martial arts schools as well as by musicians and interestingly, Chinese Opera performers. During the Ching Empire when Martial Arts were outlawed because of political unrest, many of the martial artists hid in the Chinese Opera troops. In Chinese Opera there is always the figure of a bearded warrior, and martial arts plays an important role on the stage (photo left). Because of the close relationship between opera, music and art in general and Kung-Fu, the Busaganashi became the patron saint of martial artists. This god can be found in shrines in White Crane martial arts schools in Fujian.

The legend of the Busaganashi is one that is said to be intertwined with the very essence of Goju ryu Karate, and closely tied with the founder of Goju ryu, Miyagi Chojun (1888 – 1953, 宮城長順, photo right).

In the late nineteenth and into the twentieth century when Miyagi was alive, pictures of Busaganashi were found everywhere in China, not only in kung fu schools, but also in restaurants and even in the market place. When Miyagi Sensei went to Fukien on one of his trips with his friend Gokenki to buy Oolong tea, he bought a scroll of Busaganashi and brought it back to Okinawa. According to Eiichi Miyazato (宮里栄一) Sensei, the founder of the Jundokan (順道館), Miyagi Chojun prayed to the Busaganashi picture every day.

In one of the Okinawa air raids during World War II, many of Miyagi’s possessions were destroyed. Unfortunately, books and pictures including his picture of Busaganashi were turned to ashes. Certainly Miyagi was very sad about this. Seeing this, one of his students, who had previously made a sketch of the photo, traveled all the way to the Philippines to have a wooden statue of Busaganashi made.

Though the student was fearful that Miyagi would be upset for having the statue made without his permission, Miyagi was so overwhelmed with joy that the karate master was brought to tears. He placed it at the deep end of the dojo in the Jundokan where it is told that it still sits to this day.

Now that you understand who Busaganashi is and also its legend. I want to share a few interesting photos. The first photo shown to the left was published in 1956 but taken before 1946 of “Miyagi Chojun and Kyoda Juhatsu” in the days of their youth. This photo is interesting as it is thought to be a Bunkai Kata and Kumite practice, supposedly, imitating the pose of Busaganashi. Yes, it does resemble it somewhat.

What is more interesting is a photo below right of Tetsuhiko Asai, the founder of Asai ryu karate. This photo was taken from a video clip where he was demonstrating the whip leg technique. When you compare this photo with the image of Busaganashi, do you not find a greater resemblance between them? Can it be simply a coincident? Can we believe that it is a proof that he might have become one of the martial arts deities or gods after he went to heaven? It is true that I am very biased about Sensei Asai, so it may be just my wishful thinking. But, who knows? 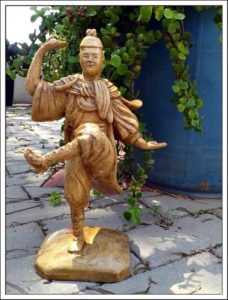 Grand Master Kanryo Higaonna (Higashionna was the original Okinawan pronunciation) was born on March 10, 1853, in Naha, the capital of Okinawa. His father, Kanyo, worked in merchant shipping between the small Okinawan islands trading daily goods. From an early age Kanryo Higaonna helped his father in this work and through the hard work he developed he achieved a strong body. Kanryo Higaonna was a teenager when his father died suddenly. Higaonna began his training in martial arts in 1867 in Aragaki Seisho’s monk’s fist (Lohan Quan) boxing. In 1870, at the age of 16, he traveled with his instructor to Fuzhou in China. Once in Fuzhou he studied Chinese martial arts under the instruction of the great master RuRuKo (Xie Zhonh Xiang in Chinese). RuRuKo was the founder of gongfu and was a student of Pan Yuba who in turn, was a student of Lin Shixian, a master of white gongfu. Higaonna also received instruction from numerous other gongfu masters including Wai Xinxian. Hiagaonna remained in China for a period of 5-13 years. In addition to studying the arts of empty hands and weapons, he also studied herbs and Chinese medicine, including acupuncture.

Chojun Miyagi (founder of Goju-Ryu and successor to Higaonna) said of Higaonna, “My sensei possessed incredible strength; the severity of the training he underwent in China is beyond comprehension …. Kanryo Sensei ‘speed and energy were of superhuman truth; his hands and feet moved faster than light. ”

Words cannot express your true ability. We can only say that his ability was incredible, but even this cannot do him justice.

In the year 1881, he returned to Okinawa where his martial arts would become known as Naha-te though he always referred to him as chuanfa. Kanryo Higaonna taught these martial arts to the Okinawan people and at the same time continued his own research and practice. To teach the youth of Okinawa he developed a teaching method that was specifically designed to develop the mind and body; to improve both and achieve a remarkable physical well-being.

The first occasion on which the secret and secretive art of “Naha-te” was opened and taught to the society occurred in October 1905, when Higaonna began teaching at Naha Commercial High School.

When teaching, Higaonna was a master of extremely hard work. However, in his everyday life he was a quiet and humble man who was renowned for his virtuous character. He was a person who had no need or desire for worldly and material things. He leads a simple life that was dedicated to the study and practice of martial arts.

There are many stories that relate tales of Kanryo Higaonna’s life and training to the power of his legs was legendary so that he was often referred to or called in Okinawa as “Ashi Higaonna” (“Higaonna legs”). His virtuous character was widely and widely known and respected, and due to his renown the people of Naha gave him the name “Obushi Higaonna Tanmei”, a name that reflected the affection and respect that the people of that time had for this great supreme man and martial artist.

Kanryo Higaonna ‘an incomparably skilled man without equal in the history of martial arts, his great and distinguished work consisted in bringing Chinese martial arts from China to Okinawa, and there he began to teach these arts among the Okinawan population.

Kanryo Higaonna was now awarded the title; “Kensei” (holy fists) Kanryo Higaonna “a title that is eminently enshrined. His name is synonymous with the martial arts of Okinawa and Naha-te, and his spirit is destined to live and endure forever as a great treasure of great value. within Okinawan culture.

Kanryo Higaonna dedicated and devoted his entire life to karate. He passed away in December 1915 at the age of 63.